Hisense have a strong, constantly evolving relationship with UEFA as an official partner of the UEFA Nations League Finals, which this year we helped take to the next level.

Continuing Hisense’s EURO 2020 campaign, #UpgradeYourHome which aimed to bring the experiences/emotions of the tournament into the home, we helped fans get closer to the newly acquired Hisense Player of the Finals official competition. This was achieved by hosting a competition on Hisense social channels concurrently with the tournament, to give one football fan the chance to receive their very own Player of the Finals trophy, and national jersey of their choice. 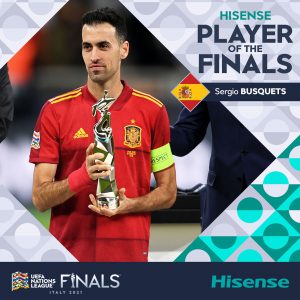 We were responsible for putting the rights in place for Hisense Player of the Finals, developing a highly anticipated, branded trophy reveal as well as helping with the #POTF social competition. With 152 total posts picked up and shared across five different Hisense markets, our #POTF content reached an impressive 3.6M views, making it our second most viewed content category of the tournament. Our content surrounding Skill of the Day caught the eye of our fans the most, receiving a staggering 7.1M views across Hisense and UEFA platforms.