Last month we helped our client Umbro with a historic kit launch in line with the brand’s partnership with England Rugby. Launching the 2021/22 Home, Alternate and Pro Training kit ranges, we championed and unveiled a bespoke Women’s Rugby kit; a first in rugby’s professional era.

Umbro worked in collaboration with members of England’s Red Roses squad, taking inspiration from the player’s pride in the jersey, to create the new kits which features subtle rose thorn detailing around the collar and shoulder area.

In launching the new England Rugby range, and continuing to support the commitment by the British brand to champion the women’s game, we also spearheaded Umbro’s newest creative campaign, It’s Time.

The It’s Time campaign will begin to roll out across Umbro’s multi-sports properties and highlights the holistic preparation that goes on throughout a week to allow athletes to perform when it counts.

From rest, active recovery, analysis, training and travel, the It’s Time campaign tells the story of a week and how that directly links to performance on a match, race, or event day.

Our team managed all elements of content capture and talent management during three shoot days at Twickenham Stadium, adhering to strict COVID19 protocols in the process.

With the help of our creative team we created all launch assets and deliverables that would sit across England Rugby, Umbro, and retail partner platforms, alongside printed assets which now feature across the England Rugby Store.

The launch was amplified across Umbro’s paid, owned and earned channels with support from brand ambassadors in the men’s and women’s squads. As part of the launch we also announced Umbro’s partnership renewal with England Rugby, which sees their deal with the national team extend until 2028. 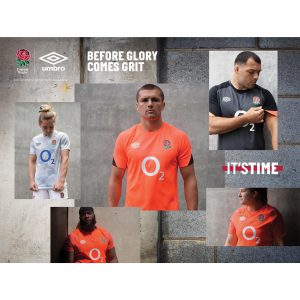