A McLaren 570s was installed at Charing Cross and on display throughout the day, collecting signatures from consumers as they came into the area for the F1 London Live event. Later in the day Mika Häkkinen signaled the start of the drivers’ parade as part of the F1 event, taking Sergio Perez for a trip down Whitehall in the Johnnie Walker two-seater Join the Pact car, a Caparo T1.

The event attracted a whole host of F1 drivers, past and present, and provided a showcase not only for the sport but for the important anti drink drive message.

The campaign continued throughout the weekend in Silverstone, with the McLaren 570s and Caparo installed in the F1 fan zone for consumers to sign.

As part of the campaign Johnnie Walker has partnered with the Department for Transport THINK! campaign which was visible on both McLaren Honda F1 cars on the weekend.

You can make your commitment to Join the Pact by posting on social media using #JOINTHEPACT. 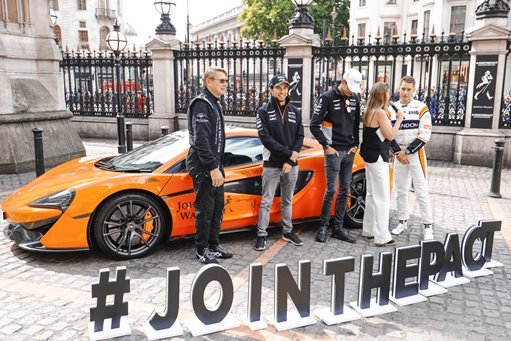