With gigs cancelled and venues closed music fans were desperate to see live music. As the brand that has supported live music for 20 years, O2 set out to rethink what a live music experience could be.

We had to find a way of allowing people from all over the world to be able to experience and enjoy the thrill and excitement of attending a live music gig whilst still being in their living room.
So, from the 21st of June 2021 we added a bit of brightness to players around the world when we invited them to The O2 in Fortnite Creative; the world’s most iconic venue in the world’s biggest game.

But this wasn’t just re-creating a gig, this was reimagining live music without limitations; a blueprint for the future of music performances.

We secured a partnership with Epic Games along with a fantastic team of pro-builders in creative games, Team Cre8, we set about designing a player-first experience with rides.
What better way to show off our virtual O2 than to feature an up-and-coming British band – Easy Life. Each area of our virtual O2 was tailor-made to a different Easy Life song through an interactive narrative featuring the new Easy Life album “Life’s a Beach”.

Surprise after surprise, players never got restless as we moved them through six incredible environments. All that and we even launched the first collaboration between Epic and a band to create the in-game music track. UFOs & Aliens written and performed by Easy Life integrates perfectly into Fortnite Season 7, Invasion.

The results saw 15.2 million concert views and we effectively sold out every seat in the O2, for the next two years. We also managed to secure 362 pieces of coverage across channels and even had YouTuber, Ali A, stream the live event on his channel which peaked at 576k views.

Simon Valcarcel, Head of Brand and Consumer Marcomms at O2: “We couldn’t be prouder to work alongside both Island Records and Epic Games to bring such an incredible experience to O2 customers and music fans all over the world via Fortnite Creative. O2 has a rich heritage in music and we’re committed to providing music fans with unique experiences so it’s only fitting that we’re bringing the world’s most popular entertainment venue into the world’s biggest game. We know how much everyone – us included – has missed going to gigs so we’re excited to bring the UK’s hottest up-and-coming act to music fans globally through Fortnite Creative.” 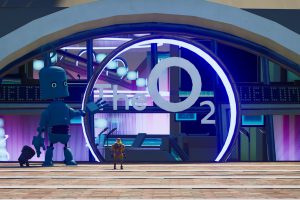