TfL worked with UK agencies of record, VCCP London and Wavemaker to create the integrated campaign which celebrates the most significant upgrade to London’s transport network since the Jubilee extension. Stretching from Berkshire in the west, through central London and out to Essex in the east, the new work highlights how the Elizabeth line will be crucial to London’s recovery from the pandemic, by providing transport users with new journey options across the capital and adding an estimated £42bn to the UK economy.

The Elizabeth line launches with a beautiful 40” hero film directed by celebrated HLA Director, Simon Ratigan, and the creative debuts the new purple Elizabeth line signage, as well as featuring recognisable elements of TfL’s iconic infrastructure. To elevate the state-of-the-art architecture of London’s newest railway, VCCP London worked with the Chineke! Orchestra to record a bespoke arrangement of the famous waltz ‘Blue Danube’ by Johann Strauss. The Chineke! Orchestra brings together musicians from over 30 different nationalities and has just relocated their rehearsal space to Woolwich Works, a stones throw from the new Elizabeth line station. Their involvement is a fitting tribute to how the brand new service is bringing together more people and places, across London, than ever before.

Throughout the film, many of the incredible customer benefits of the new line are highlighted including step free access, more space and faster journey times. The orchestral track is complementary to the new train line, as the music builds to create a soaring crescendo which is a true celebration of the campaign strapline which is ‘bringing more of London together’.

The campaign targets London and the surrounding areas which the world class line will service as TfL connects more people and places together than ever before. The media communications strategy, as well as the planning and buying for this fully integrated campaign executed by Wavemaker reflects this. High reaching, high impact media channels including TV and pan-London OOH are supported by a regional approach with VOD, Finecast and regional press to ensure the campaign reaches travellers across the Elizabeth line from Reading in the west and Shenfield in the east. This includes the adaptation of iconic TfL roundels with some of the Elizabeth line’s key benefits. Appearing in OOH across London, the roundel signs have been reworked to include slogans such as ‘it’s here,’ ‘step free,’ more space,’ and ‘faster journeys’ in TfL’s signature sans-serif typeface to maintain TfL’s world-famous identity. Alongside this, TfL has also wrapped several iconic London buses with bespoke creative to celebrate the line and raise awareness of the Elizabeth line across the capital. 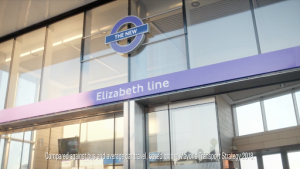